By Phillip Fritts
Special to the McDowell News 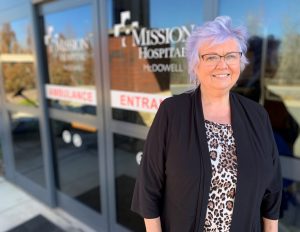 with pain between her shoulder blades. Thinking that she had just slept wrong, she rolled over and went back to sleep. She later woke up, realizing that the pain was still present and had now extended down into her right arm. “I kept telling myself that it was just a pulled muscle in my back,” said Valorie. “I didn’t have any other symptoms usually associated with a heart attack.”

Later that day, Valorie felt the pressure extend into her chest. “I was still convinced that I was not having a heart problem because there were no other symptoms,” said Valorie. “Plus, it really wasn’t a convenient time for it to happen,” she added jokingly.

After much encouragement from her husband, Valorie decided to head to the Mission Hospital McDowell emergency department. “They immediately took me back and ran tests, which confirmed that I was having a heart attack.”

“Symptoms of active cardiac disease can be atypical in females. Pain between the shoulder blades, jaw, teeth, right or left arm, as well as gastrointestinal upset, might be presenting symptoms for heart attack,” said Randell Thomas, MD, Cardiologist for Mission Hospital McDowell and Asheville Cardiology Associates – McDowell. “Progressive shortness of breath with exertion and loss of exercise tolerance are also indicators that provider consultation would be indicated.”

The Mission Hospital McDowell emergency department team remained calm and immediately went to work to stabilize Valorie as they prepared to transfer her to Mission Hospital for a cardiac catherization and the higher level of care needed for a complex heart case.

Once at Mission Hospital, it was revealed that one of Valorie’s arteries had a 99 percent blockage. The Mission Hospital team was able to improve the blockage with a stent.

“This event re-enforced that women experience heart pain differently from men,” said Valorie. “Now that I know how my body communicates heart pain, I will not wait as long to get help.”

“It is important to check with your provider when you have unusual symptoms,” said Thomas, MD. “They can incorporate those symptoms into a broader context and determine whether worrisome medical issues could be present, requiring diagnostic testing.”

Valorie is back to work at Mission Hospital McDowell and is thankful that no lasting damage was caused from the heart attack. “I am making better choices now that I know I am not invincible. I want to enjoy retirement, so I have to make these changes now,” said Valorie. “Dr. Kristin Chally and the entire Mission Hospital McDowell team were so caring and took time to explain things. It was as great of an experience as you can have, given the circumstances.”

Don’t delay your preventative care and testing. Mission Hospital McDowell remains safe for care. [1] Improve your heart health and call us at 828-274-6000.