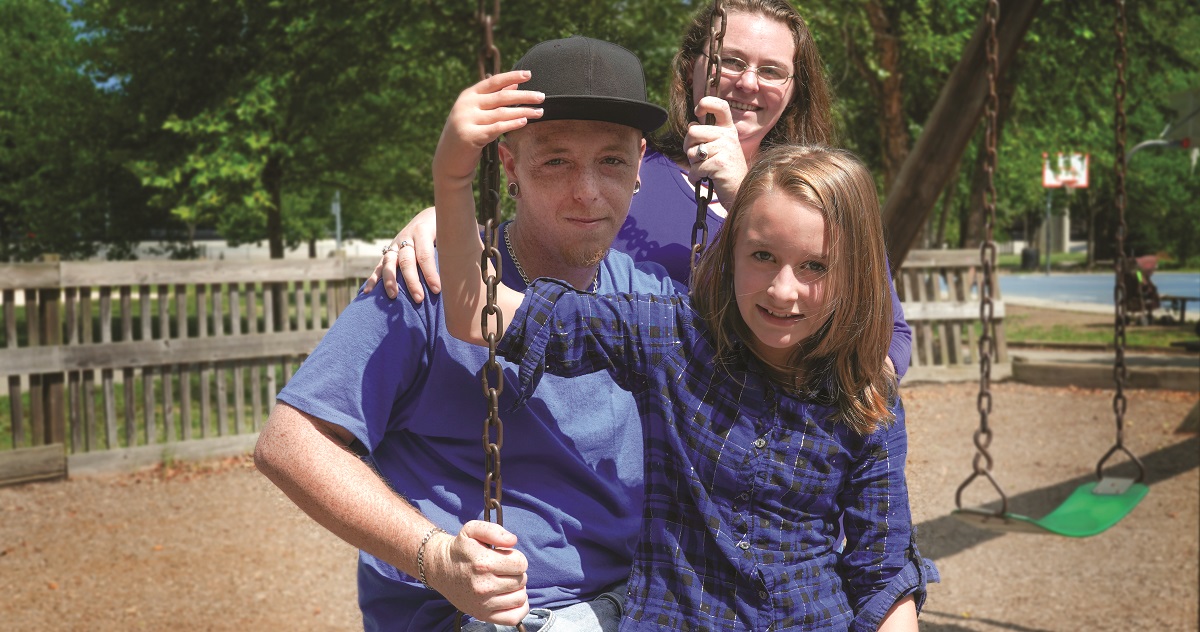 By Robert A. Poarch

“Before, Cheyanne would hide her hand. If I went to introduce her to people, she would stick it in her pocket a lot, or in her hoodie, or hide it behind her back if she didn’t have a pocket,” said mother Jessica Worley of Asheville. “She doesn’t have to worry anymore. She walks around like any normal child would now.”

“When I first got it, I thought this was my other hand,” said Cheyanne. “It looks really real. Some people didn’t know which is the fake hand.”

From Hiding to Hope

At age two-and-a-half, Cheyanne’s life changed when her right hand and part of her arm were severely burned. She lost all of her digits down to small nubs on that hand, and she had to have complete skin grafts. “She had to have a total of 37 surgeries,” said Jessica. “She doesn’t have sweat glands anymore, so her arm doesn’t sweat like a normal person. She doesn’t have the same layer of skin that the other arm does.”

At age 10, Cheyanne had had as many plastic surgeries as possible, and her plastic surgeon released her to get a prosthetic. Working with the orthotists at Mission Health’s CarePartners Orthotics & Prosthetics, Cheyanne was fitted with a putty device.

“I felt for her, because she was so young when it happened, and her fingertips were so sensitive,” said Amy Street, CPO (certified prosthetist orthotist), with CarePartners Orthotics & Prosthetics. “When we were trying to figure out what we were going to do, my first thought was for her to be able to write with that hand. And then aesthetically, we could figure out what would be a good match. The solution was a custom-made pencil holder made out of putty.”

Functionally, the putty allowed Cheyanne to eat with utensils and write with a pencil. Aesthetically, mom and dad didn’t want their little girl to have to hide her hand. The next step was to figure out a prosthetic solution.

“I like to call it a functional cosmetic silicone restoration,” said Street. “Cosmetically it looks just like the other side, but it is functional.”

The first step in creating the prosthetic was to take an impression of Cheyanne’s arms, and from that detailed molds are created. The mold is then flipped and inverted for her right arm.

“If you notice on her hand, her pinky is kind of doglegged, I think from an old accident, so her prosthetic pinky does too,” said Street. “The impression captures wrinkles and fingerprints, and it’s super detailed. So, all of that gets transferred.”

From the impression, inner and outer “gloves” are created. With Cheyanne present, an artist paints the inside surface of the outer glove, matching her skin tone. The painting took more than four hours. Fingernails are then fabricated and glued on and painted. “Everyone has different shapes of nails, so they have to match those, too,” said Street.

Silicone is then carefully squirted in between the inner and outer “gloves.” Too much silicone and the prosthetic will be too hard for Cheyanne to move.

“We didn’t want to make it so loose that it would wrinkle when she flexed her wrist,” said Street. “So, they make it a little bit looser through the wrist and fingers so that she could use it for a couple of years. It’s a little stretchy, so there’s some wiggle room.”

“The people who did the work with Cheyenne’s prosthetics, they were very hands on. It was really nice,” said Jessica. “And, Miss Amy is an amazing person. She’s really kind hearted. She really got on Cheyenne’s level. Cheyenne was really comfortable with her.”

It Looks So Real

“I felt really excited to be able to have a prosthetic arm to be able to do things,” said Cheyanne. “I wanted to know how to write better, to paint better, and handle stuff better.”

“It blew my mind that it looked identical to her real hand,” said Jessica, when she saw her daughter’s finished prosthetic for the first time. “We couldn’t tell the difference.”

With the prosthetic, Cheyanne had to get used to having a right hand again after all of those years. And, she’s making great progress.

“She is exactly on point as if she were just starting to use her hand for the very first time,” said Jessica. “She can button her pants, she can hold plates a lot easier, she can open bottles a little bit — she’s working on getting the grip down. She’s still trying to get used to the fact that she now has fingers. Because, mainly her entire life, she’s not.”

“When I’m at school, it’s awesome using it because I can write my work better, less sloppy. I can do PE. I can do STEM [science, technology, engineering, math] activities better,” said Cheyanne. “I can cut things at home. I can do a lot more with my family than I used to. I feel more confident.”

Cheyanne can now wear the prosthetic all day. “In the beginning when we first got it, we had to be very cautious, because of the material,” said Jessica. “The only time she chooses not to wear it is when she eats, because Cheyanne says that she doesn’t want to get any food on it.”

“It’s why I do this,” said Street. “It’s seeing people’s first steps. This device is more cosmetic. People get tired of being asked about their limb differences. A lot of people missing fingers or hands will keep their hands in their pocket all the time. They’re tired of people staring and asking questions. You’re living with this. It doesn’t define you.”

“It’s really kind of taken the weight off of our shoulders,” said Jessica. “Because, just making her happy is honestly our biggest thing. So, as long as she’s happy, that’s all that really matters to any of us. That’s all we ever want for our kids.”

Cheyanne said when she goes to college, “I would like to be a surgeon like my doctor. I would like to help people. I didn’t feel normal before I got the prosthetic. It just makes me feel better that everybody’s normal.”

Looking to the future, Jessica said, “There’s nothing but blue skies for my kid. She’s ready to take the world on now!”